To start things off, we’ll throw it over to Craig for a brief introduction.

It’s hard to believe it’s already been a year since we first launched Aliens: Fireteam Elite!  We got to tell the story of Katanga and LV-895 in the initial four campaigns of the game, but we left plenty of threads lying around for other missions and stories the crew of the Endeavor could explore. Thanks to our incredible community and the support we’ve received, we realized we could provide players with more story content, and it didn’t take us long to figure out the exhilarating story we wanted to tell. Pushing ourselves and our storytelling to delve deeper into the Pathogen enemies of LV-895 that players encountered in Campaign 3: The Gift of Fire, we realized there was a lot left unexplored there. Where did these creatures come from? Why are there so many? The Pathogen is so dangerous that it was an obvious priority for The Endeavor, and Cold Iron to investigate. This expansion includes new enemies, new stories, and our toughest missions yet. We can’t wait to see you all take them on!

As Craig alluded to, Pathogen finds the crew of the Endeavor on a mission to discover more about the mysterious infection ravaging LV-895. They must venture into new and unexplored Engineer ruins and investigate a deadly new hive unlike anything they’ve seen before. If you haven’t seen it already, check out the official gameplay trailer below! 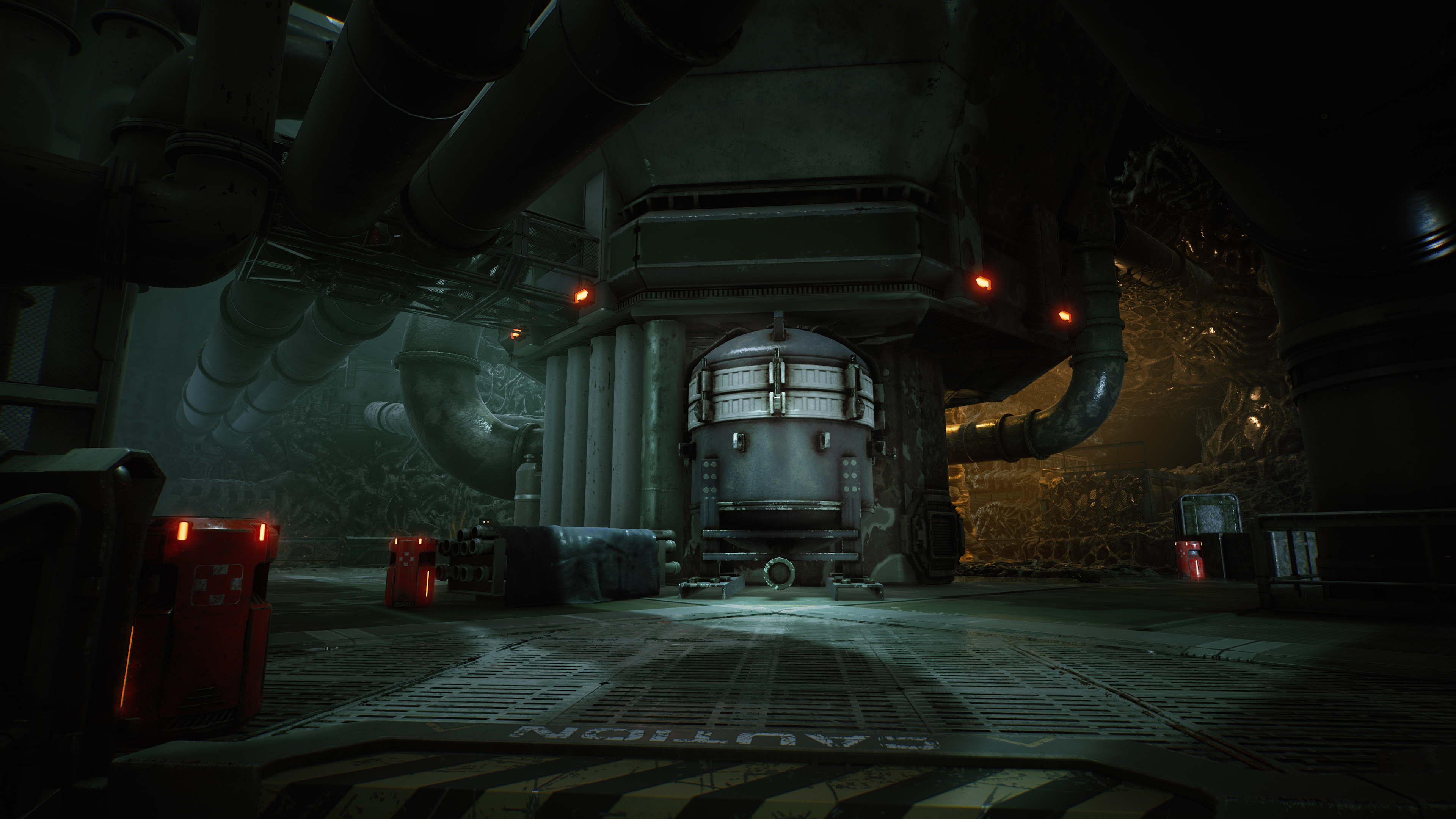 It’s been a year filled with Facehuggers, bursting eggs and galactic adventures. Together we’ve killed innumerable Xenomorphs and have helped make the outer colonies a safer place for just about everyone.

It hasn’t always been easy, especially since we introduced Hardcore mode. Not only did you marines survive a run in with a Xenomorph Queen, but you even took down one of her Pathogen counterparts. Not to mention the countless Warriors, Crushers and Praetorian that have learned what happens when they cross paths with the elite crew of the Endeavor.

The new enemies you’ll face in Pathogen are only part of the equation. You’re also likely to find Stalkers and Poppers joining the swarms. Just remember to always stay on your toes as this isn’t your average bug hunt.

And of course, even if you make it through the swarms of Brutes, Blights and everything else, you’ll still have the Pathogen Queen to contend with.

A towering infected Xenomorph, the Pathogen Queen has heightened aggressiveness and unrivaled ferocity. Her large clobbering arms can cause great damage, even if they aren’t direct hits. She’s also capable of shooting cluster shots of deadly acid, so watch out for those. And we haven’t even mentioned her carapace yet! 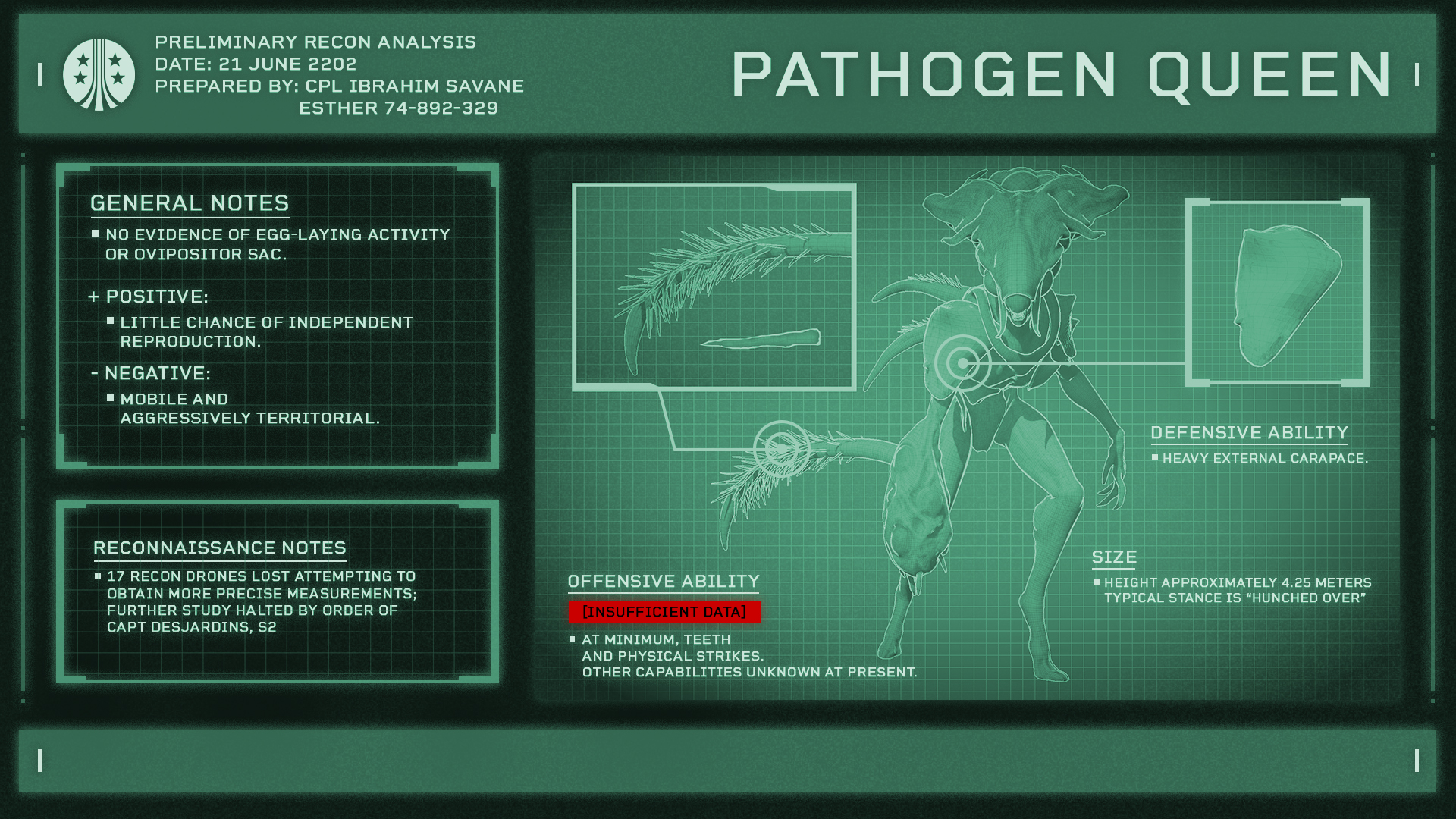 It’s time to bring in our Creative Director, Matt Highison, to break down this threat and how she came to be.

I wanted the pathogen altered Xenomorphs to feel broken, in pain, dangerous as hell, and no longer the elegant perfection of their former selves. The same went for the pathogen altered hive. It needed to be familiar, but obvious that the pathogen’s influence had made it grow wildly out of control. It’s even developed some new treacherous self-defenses in the transformation process, which Marines are going to be forced to break through.

I love the feeling in the Alien universe of, “How can this get any worse for us!?” and then things inevitably do get worse. Being trapped in a maze-like hive with Runners and Stalkers hunting you, then realizing that even the walls of this new hive are exploding into acid pools really drives that home.

As with any hive, there’s probably gonna be a queen somewhere, and here even she couldn’t escape the destructive power of the pathogen.

Her visual design is form based on function. We wanted her to have armor that players can damage and shoot off to expose weak points; have bits of her that are flung off to damage the player from a distance, along with dangerous melee options when you get too close. We started with the gameplay experience and began to explore the look from there striving to make her feel broken, tormented, and angry.

Taking down the Pathogen Queen won’t be easy. She gave even our best players a run for their money when we first started playing against her in the studio. Luckily, taking her down comes with some pretty sweet rewards.

In fact, the whole Pathogen expansion comes with a plethora of new and exciting items. Some you’ll get right away, some you’ll have to earn, and some you’ll need to get from SSGT Park. Feast your eyes on all eight new weapons in Pathogen below, along with a little extra information about the four you’ll be able to get from the armory. 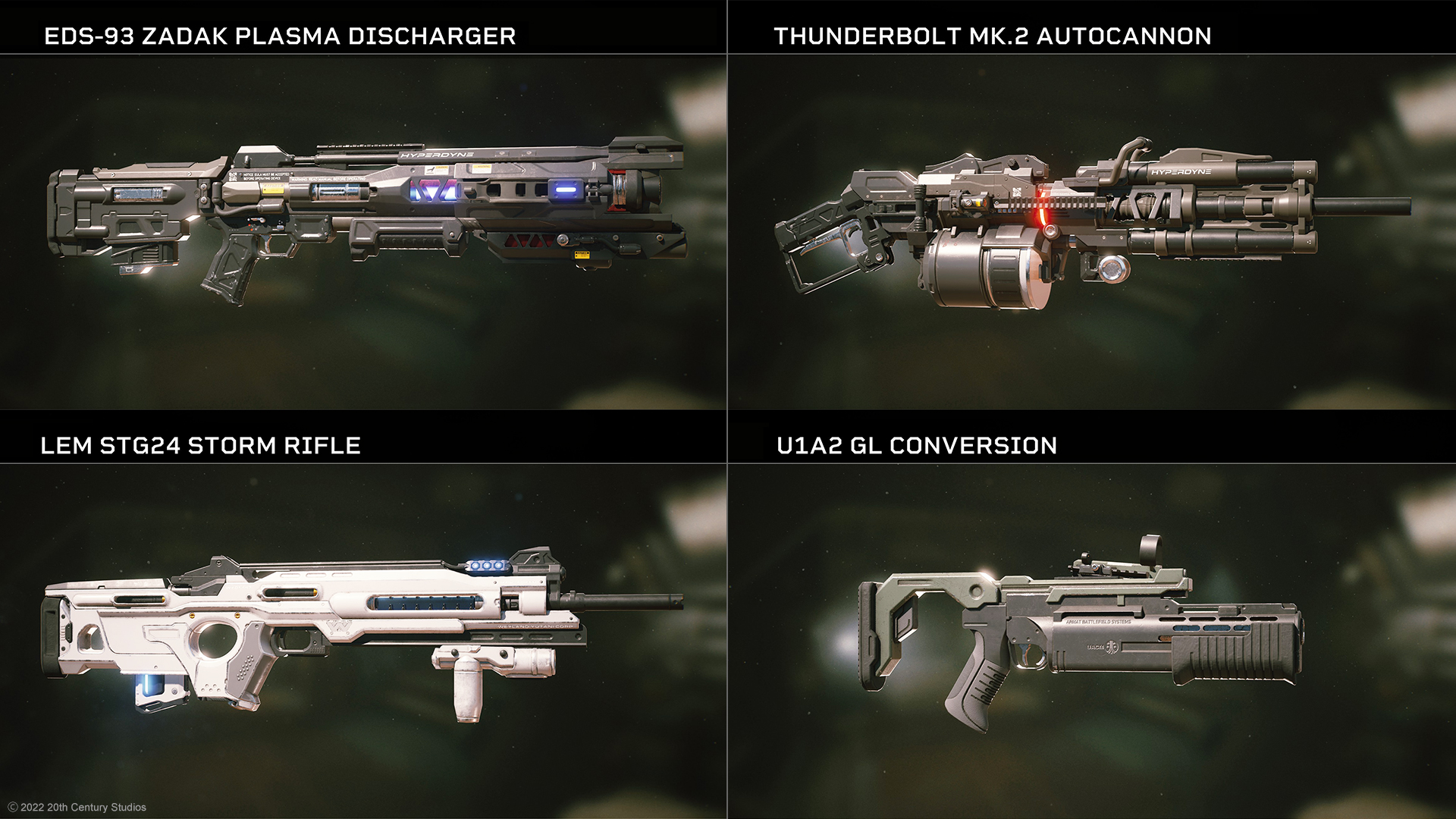 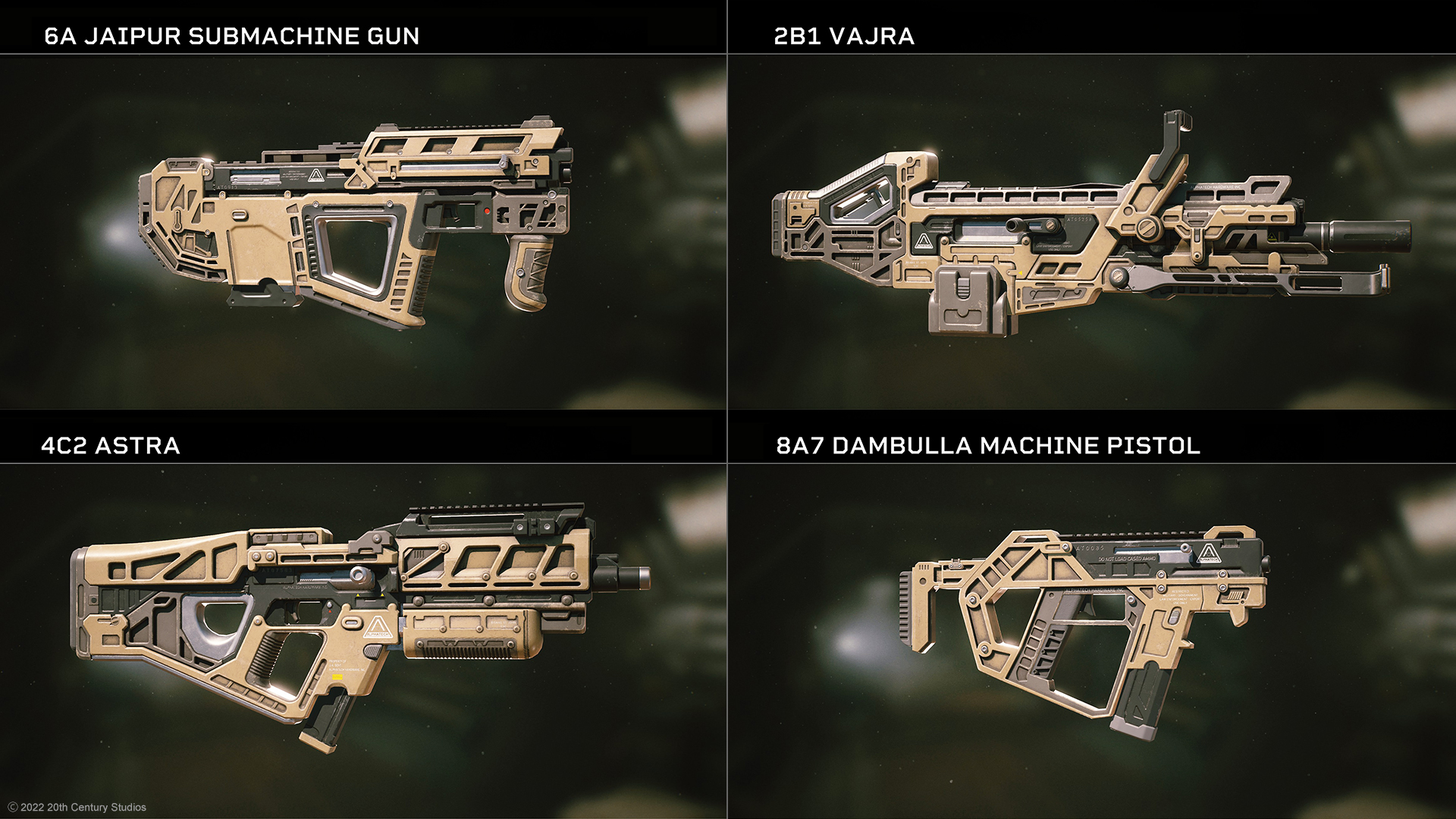 Weapons are only one of the new things to look forward to. There are also new attachments, perks, accessories and more! One of the things we’re most excited about is the new round of Replacer Perks. For more on that, we’ll kick it over to our Systems Designer, Corey LeFever.

When we started designing this round of Replacer Perks, we asked ourselves a couple questions. ‘How do we support the roles this kit has?’ and ‘How can we alter this kit's playstyle, while staying true to the kit's identity?’. With those points in mind, we began working through a handful of concepts for each kit's new abilities. That's of course after a lot of ideation that involved questions like ‘Wouldn’t it be neat if we did this very wild [REDACTED] thing?’. Then we narrowed it down a little further as we tried to find out what could work well with existing perks. For instance, Gunner's ‘Mini Grenades’ are a good pairing with ‘Disorienting Blast’ for a crowd control option, and Lancer's ‘Particle Beam’ with ‘Disrupting Radiation’ is great for locking down lanes or for focusing large threats. It's a fun challenge working on Replacer Perks, balancing the ability to stretch the design space a little further while also needing to stay on the side of providing a fairly grounded sci-fi experience for players in the end.
- Corey LeFever, Systems Designer

The Replacer Perks and all the new items in Pathogen are going to come in handy fighting against the new Xenomorphs and of course, the Queen, but that’s not all. They’re also going to be integral for one of the biggest new additions to the game: Hardcore Mode.

When discussing ways to expand on the difficulties we already have, we kept coming back to various hardcore or permadeath modes we had played in other games. How could we incorporate that feeling of danger into our game? The idea of "What happens if my marine dies? Game over, man!" was such a natural fit for the Alien universe.

We started by thinking about the rules of how it would work. It didn't make sense as a mission-selectable difficulty that could be turned on or off. Part of the challenge of this mode comes from pushing as far and as hard as you can, so we made it an entirely separate mode. This allowed us to look at a lot of other things. How does item progression work? Do we allow long-term earning? Is it a true rogue-like experience where everything starts all over every time? What happens to the story? When do players unlock this mode?

We looked at a lot of different options, and I'm really happy with where we landed. Our hardcore mode let’s players tune the difficulty to something they're happy with. Do they want a little danger or do they keep pushing all the way to Hardcore 50?

I remember in one of our earlier tests regretting some bad decisions about which kits to bring on a mission that was still tuned too hard. We just had the wrong setup and struggled. The fear of losing that character was strong, but we managed to have one team member get through the last fight while we were downed. They pulled us both up and it was an awesome end to the mission!
- Chris Matz, Lead Systems & Combat Designer

From hidden secrets to surprise encounters, there’s plenty more to be discovered in Pathogen, but we’re not here to spoil everything. Hit us up on Twitter or Discord and let us know what your favorite part is.

Until next time, good luck out there, Marines. 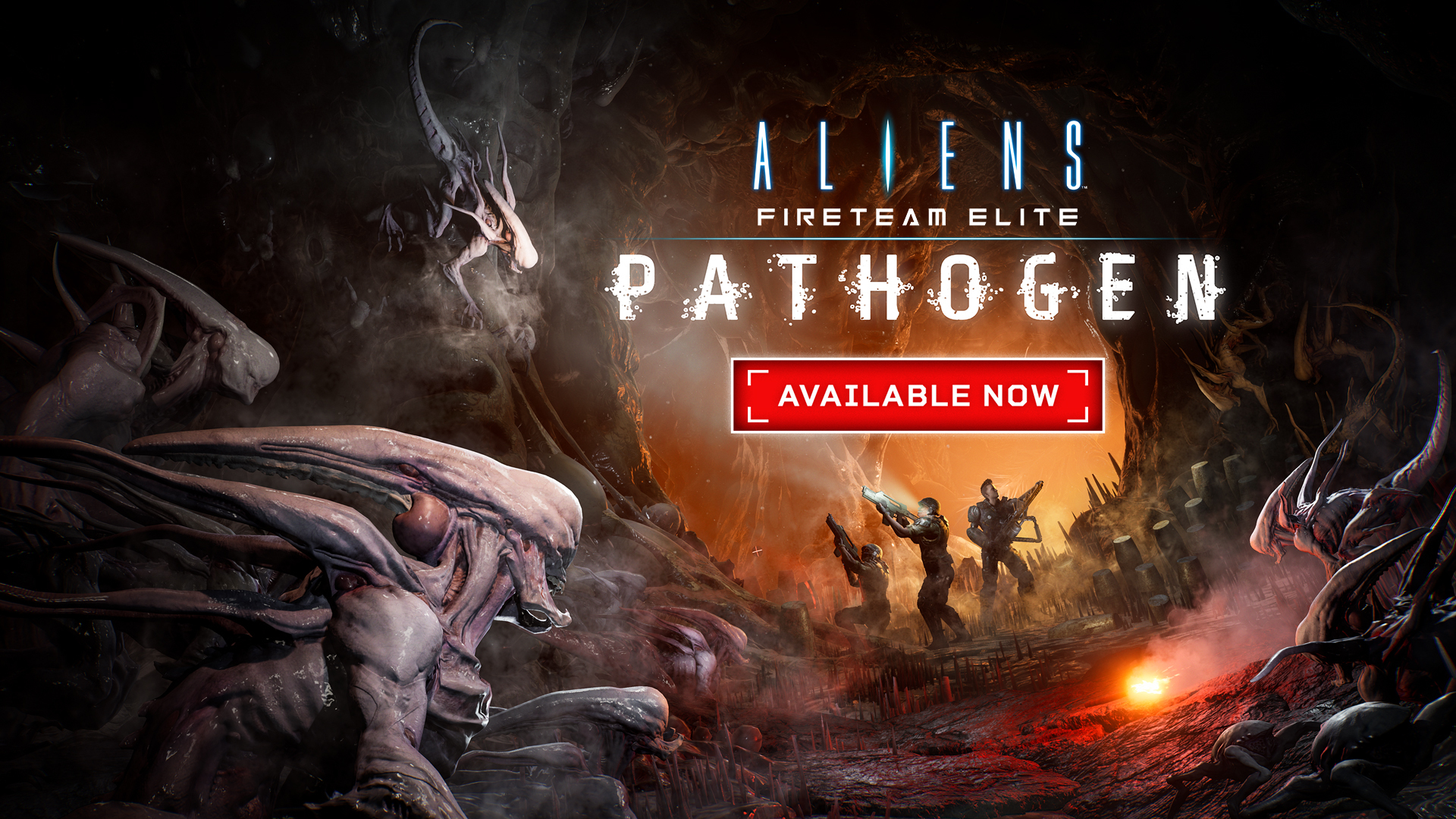 Aliens: Fireteam Elite is available on Steam, PS4, PS5, Xbox One, Xbox Series S/X, and the Windows Store. Recruit your fireteam of Colonial Marines and survive the hive! Join us on Discord and follow us onTwitter, Facebook, Instagram, and YouTube for the latest news on the game.