Season 4 Deep Dive! Everything You Need To Know & More

Welcome to Season 4: Prestige! This is the final update for our Year One Roadmap and what a journey it’s been. Season 1 saw us launch our first new class kit, the Phalanx, and now we are introducing crossplay, a new game mode, major system changes and more all packed into a single season. But before we get into all that, we’d just like to sincerely say thank you for playing Aliens: Fireteam Elite. This has been a major passion project for so many of us on the team. Just like you, we love the Alien franchise and we’re thrilled to have the opportunity to work with such a rich universe.

We invited some of our team’s most diehard Alien fans to break down these monumental updates. Cold Iron Studios CEO and Head of Studio Craig Zinkievich, Lead Systems & Combat Designer Chris Matz, Lead Content Designer Kris DeMeza, and Systems Designer Tony Marasco are ready to walk you through the new additions and share some insights into the development process. 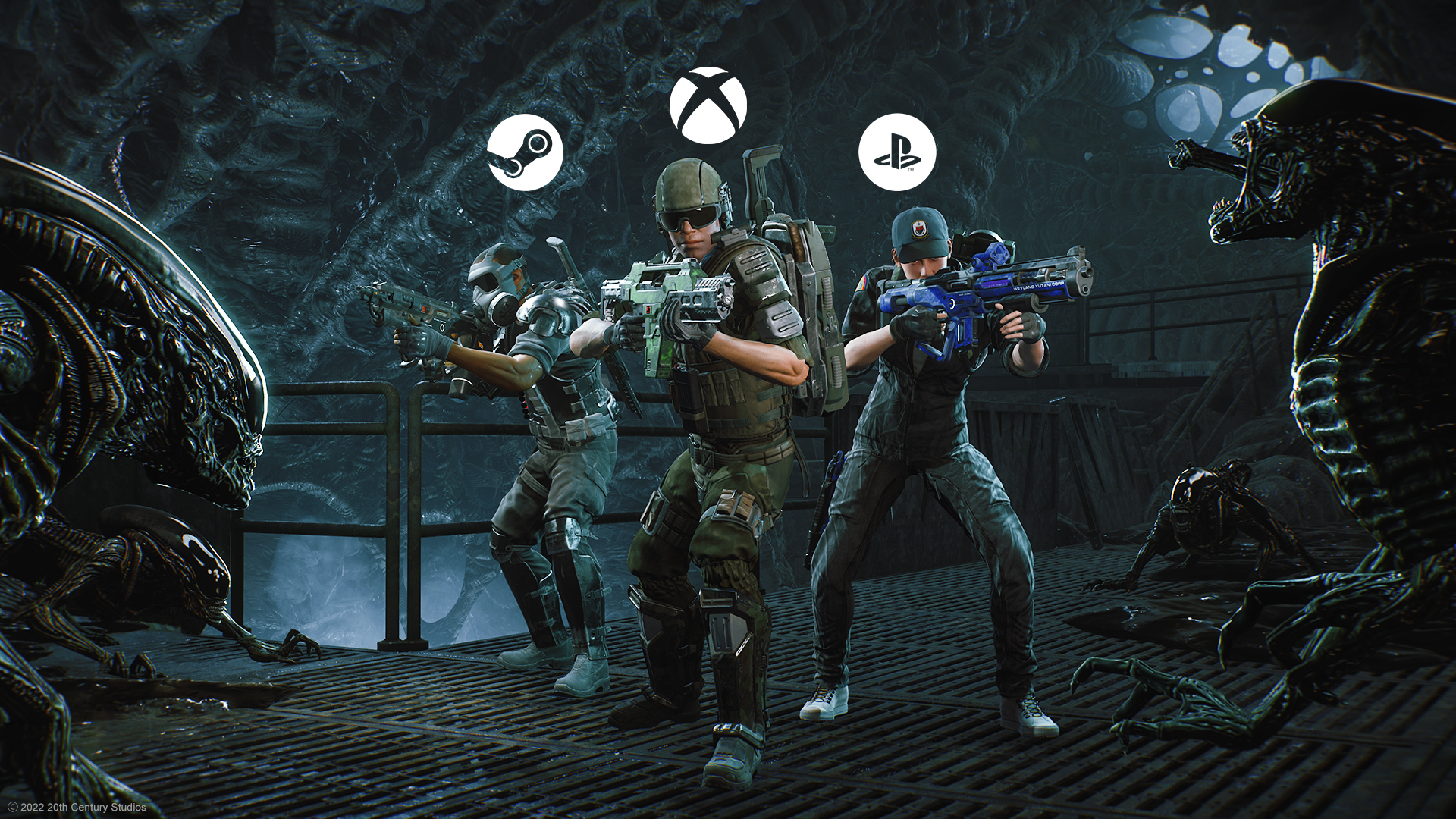 Crossplay is here! We’ve been working on this long-requested feature for quite some time now and were eager to get it out and into your hands. To speak to that, we’ll pass it over to Craig:

It’s hard to believe it’s been almost a year since the launch of AFE. Today we’re bringing our Year One Roadmap to a close with the launch of Season 4. It feels like just yesterday we were releasing the game and waiting to see how all of you would react to it. We’ve listened to your feedback and the team at Cold Iron has worked hard to fix issues, add new features, and create additional content for AFE. We’re proud of the shape it’s in today, and Season 4 is a huge part of that. I’m especially excited about crossplay! That’s one feature we’ve heard you loud and clear on and we’ve been working hard to get it in the game. We’re looking forward to seeing you all enjoy the new content and playing together across all platforms!

Crossplay on AFE means that players on Steam, Xbox, and PlayStation will all be able to play with friends and match together, including Quickplay. If you’re inviting a friend over to your fireteam, then all you need to do is: 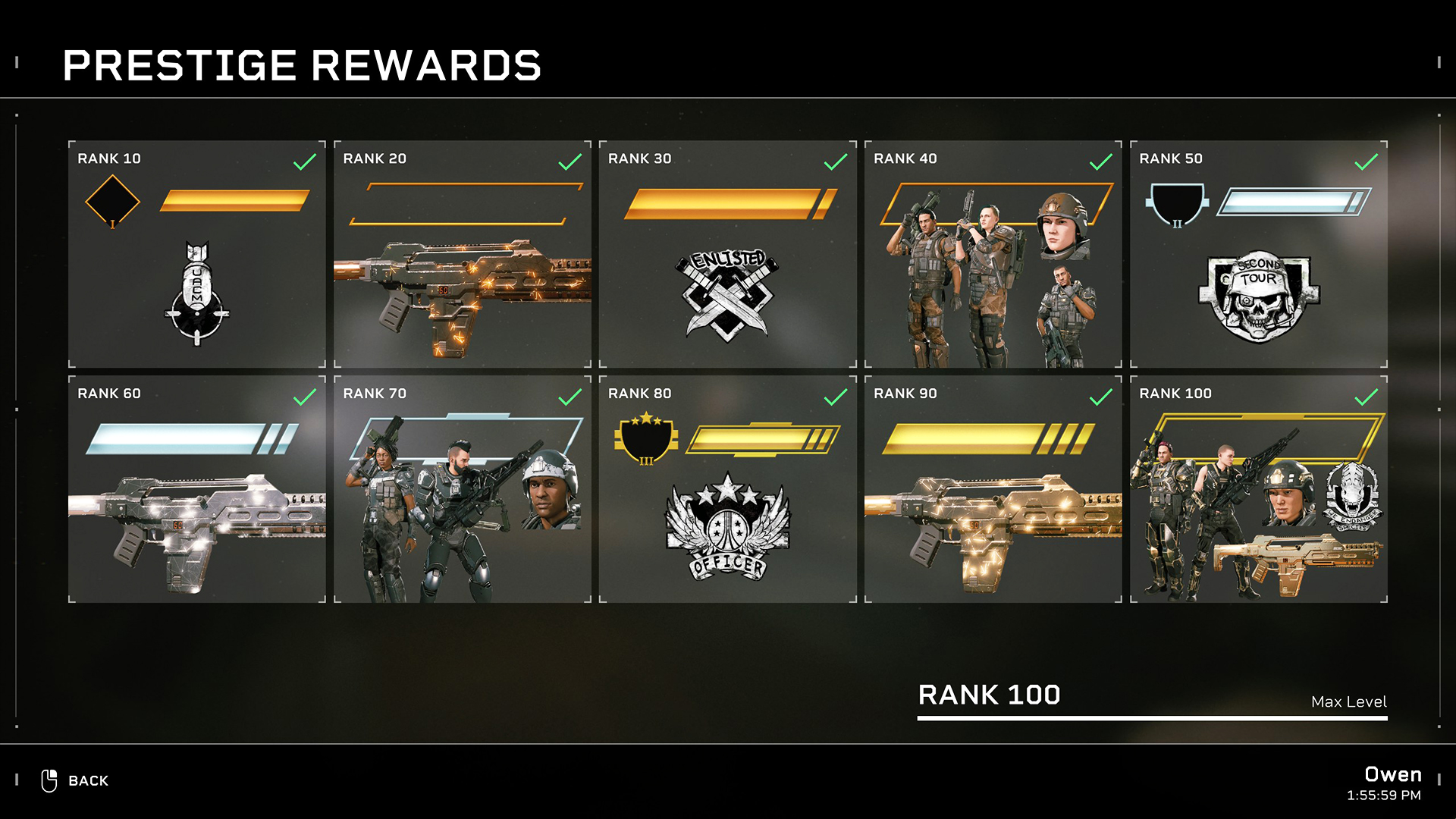 Rank up with Prestige

The Prestige system is for Marines looking to go beyond the call of duty. If you’ve already reached the level 20 cap on your favorite Class Kits and need an excuse to bring them back into the field, look no further.

After you reach level 20 with a Class Kit, you will start to earn experience toward Prestige ranks, starting at Rank 1 and going all the way up to Rank 100. Leveling up will progressively require more experience in certain thresholds, but the rewards get more exciting as well.

All Prestige rewards are purely cosmetic, so you’re not missing out on any end game abilities, but we do want to give the most dedicated marines enough bling to fuel their bragging rights. Every 10 ranks you unlock new rewards, including:

Note: Experience toward Prestige ranks will only start to go up after the Season 4: Prestige update goes live in the game. 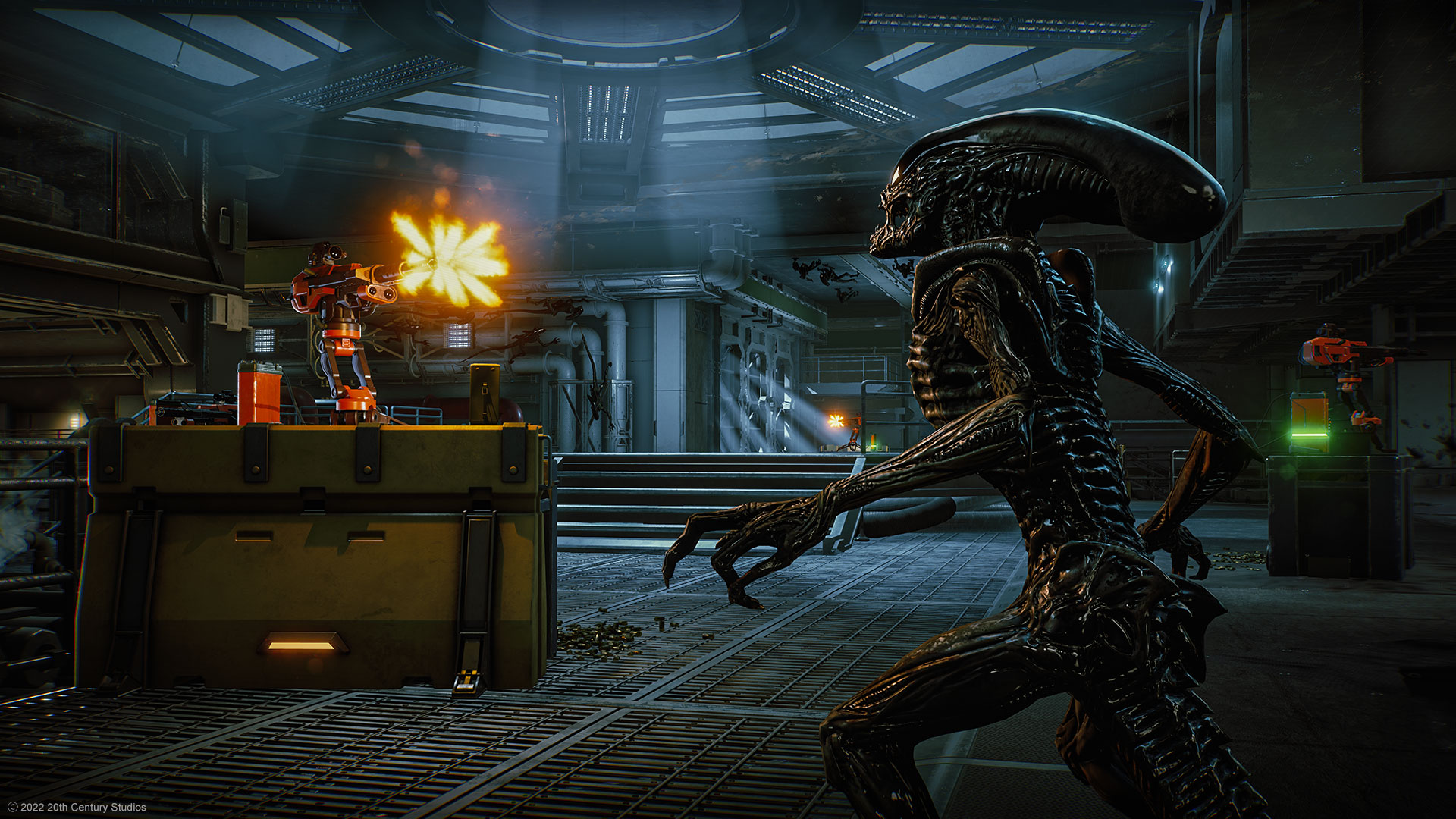 Protect Every Front With Restock Turrets

We’re excited to bring horde mode fans a new challenge with Restock Turrets. Having fixed turrets all around might lead you to think this new mode is a walk in the park, but hordes of Xenomorphs come from every direction this time around, and ammo is in limited supply.

Unlike the original Horde Mode where you rely on what you’ve brought with you, in Restock Turrets the Colonial Marines have already set up a defensive perimeter of turrets near the pinnacle of Likasi Tower. Turret ammo drops as you progress, and there’s not a lot to go around, so you’ll need to make strategic decisions on which areas to support. The Xenomorphs come from all angles, too, so you have to keep on your toes! I like to keep some turret ammo in reserve during the earlier waves so that later, when the pressure’s on, the turrets have my back.

There’s also a new set of rewards that you can unlock in this mode, affording you some additional bragging rights as well as a few new tricks. You unlock rewards every 10 waves you survive, getting the option to keep going all the way up to 50 waves. Rewards unlock based on difficulty, with higher difficulties allowing you to unlock the rewards from both that level and the levels below it. 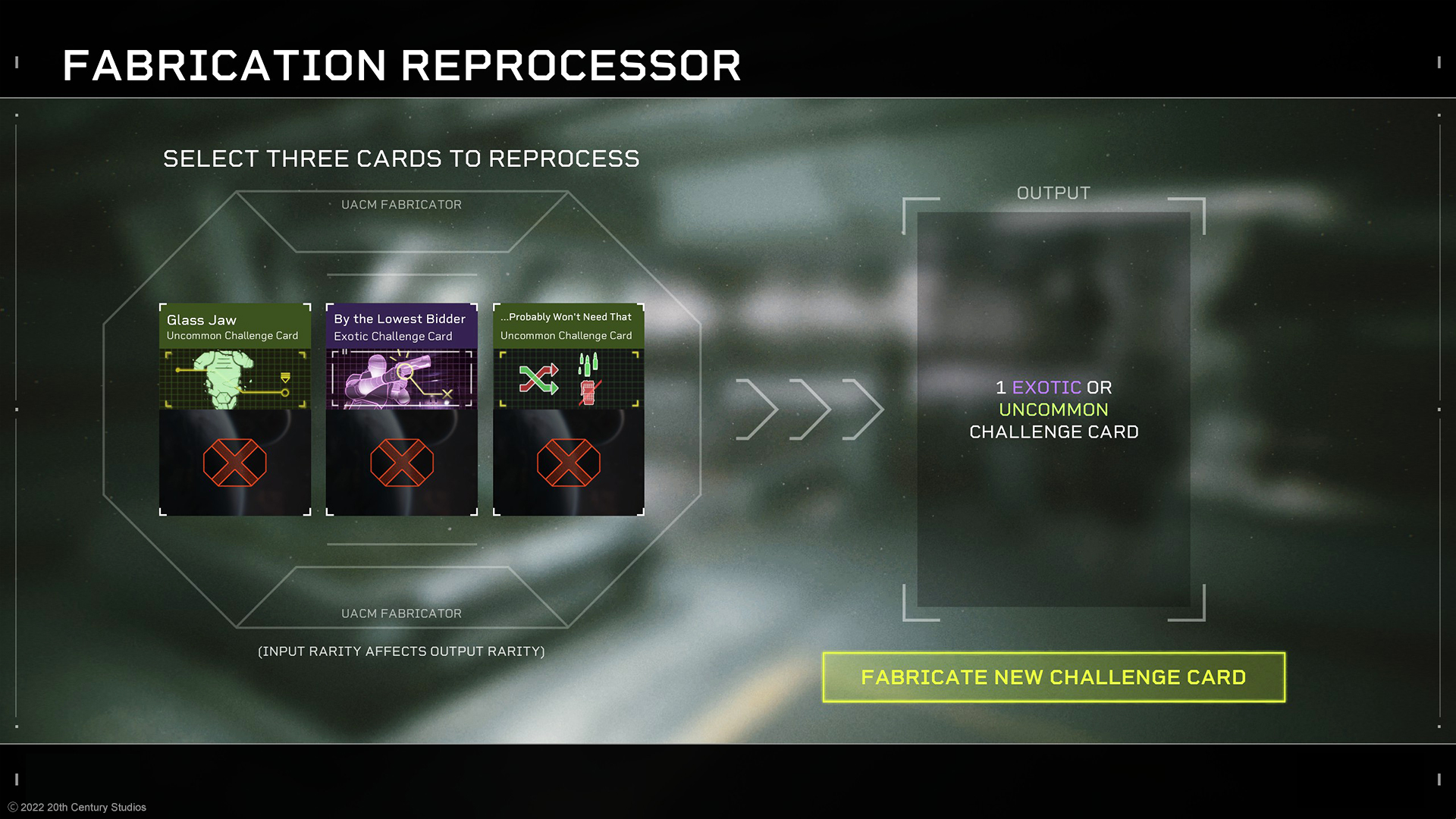 No mission plays the same way twice when challenge cards are in the mix and everyone has their favorites. But what do you do with all those extra cards that you don’t want to use? That’s where the Fabrication Reprocessor comes into play. This new device allows you to reroll your unwanted cards for new ones!

Input any three challenge cards you no longer want into the Fabrication Reprocessor and reroll them to get a different challenge card back. It’s that simple!

While some players prefer to play with really challenging cards to increase the game’s difficulty,others like cards that either make the game easier or grant them enticing rewards. The goal of the Reprocessor is to let players recycle cards they weren’t planning on using in order to get cards they potentially would enjoy more.

Another thing that we always wanted was to allow challenge cards in other game modes, such as Horde and Point Defense. We’re excited to bring this feature to the game and it’s been a blast trying out various cards in these different gameplay environments! However, not all cards are compatible with every mode. Some cards will be restricted to Campaign missions only. That said, my personal favorite new combination is the High-Threat Environment challenge card in Horde Mode as it speeds up combat and feels very rewarding when you’re playing well!

That’s right! Now challenge cards are enabled for all compatible game modes. However, it’s important to note that challenge cards are still only playable in scenarios where they make sense. This means that a card where you need to take out synths is only available to be used on missions where there are actual synths. 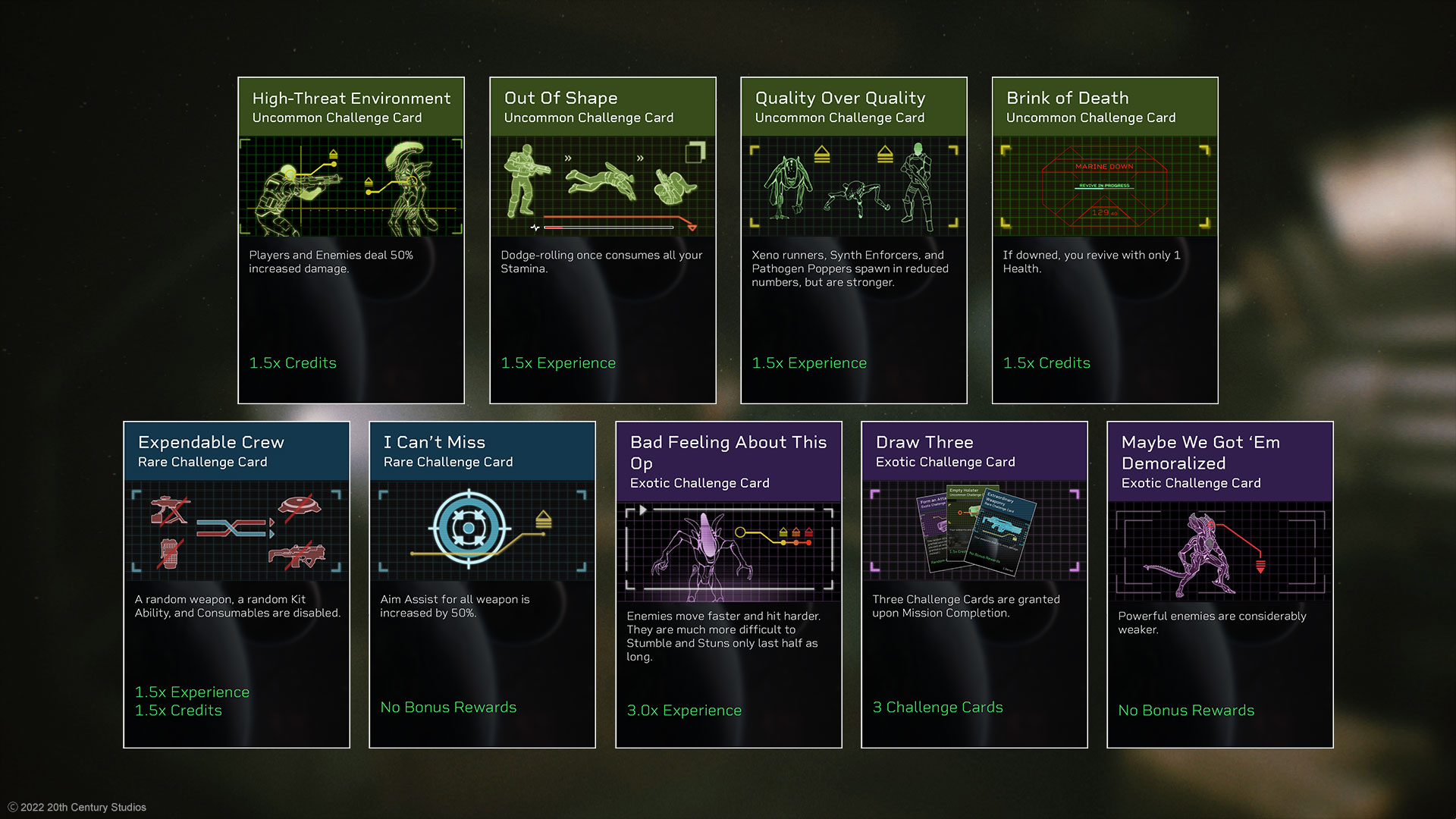 New Rewards To Set Your Sights On

Of course, with new content comes new unlockable rewards. Many of this season’s rewards are unlocked via the new      Restock Turrets mode, including all the new Attachments and a handful of hard-to-get cosmetics. We also expanded our collection of challenge cards, have a look:. 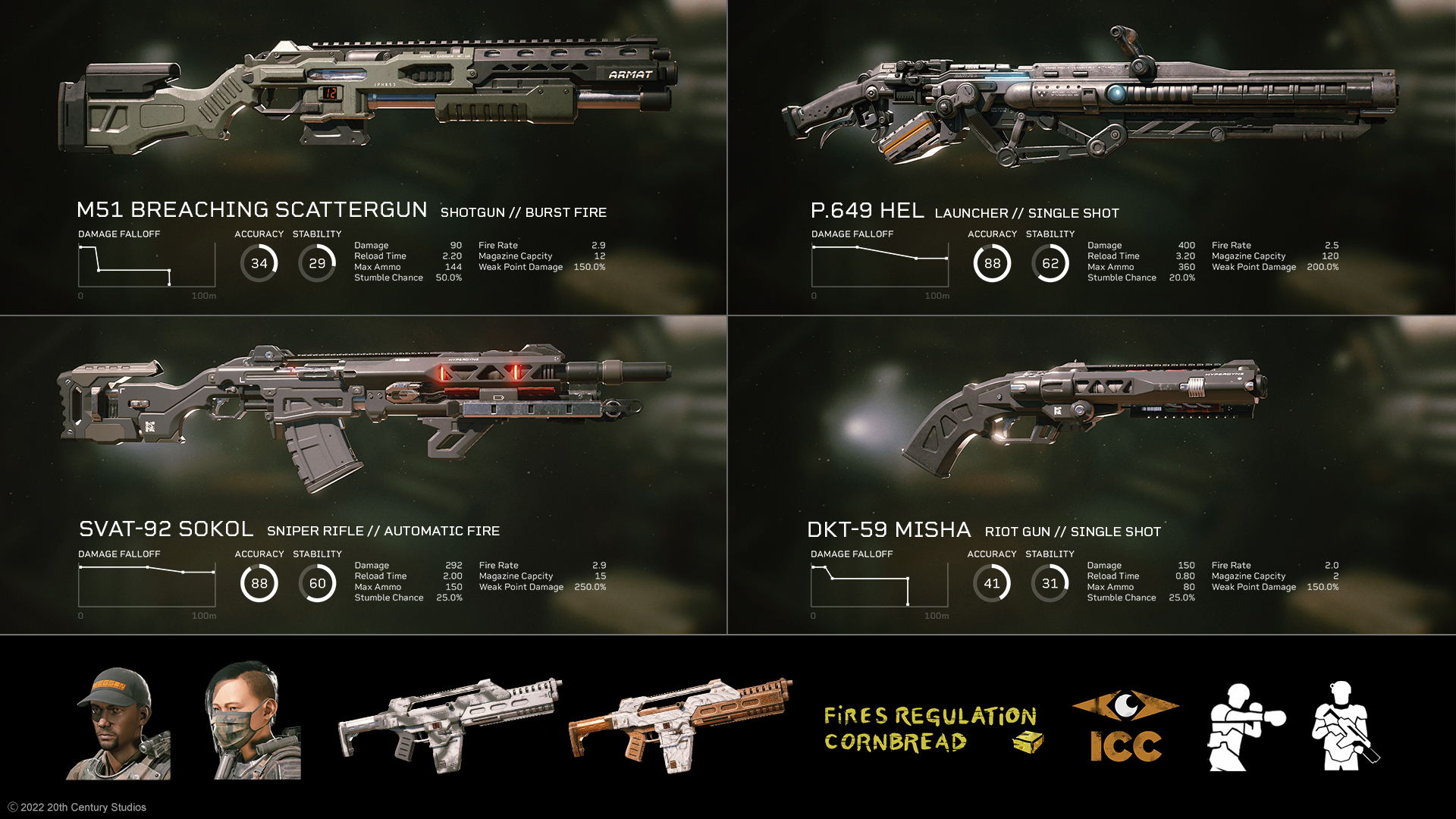 Exploring The New Additions To The Armory

Drop in on SSgt Park and have a look at what’s new in the Armory. You’ll find the Seegson Cap and Mask – Surgical Head Accessories, the Alpine Trapper and Carrot Cake Weapon Colors, the Fires Regulation Cornbread and ICC Decals, and the Shadow Boxing and Pose – Low Carry Emotes.

The addition of four new guns is the most noticeable update to the armory. This time around, we’re bringing new toys from all 3 of our weapons manufacturers, so everyone can support their own favorite corporate overl… err… law-abiding business entity.

Whenever we make new guns, our goal is to try to find new twists on our existing gameplay - more fun ways to exterminate Xenomorphs, synths, and what have you. In some cases, this means entirely new feels for weapons - like the P. 649 HEL. In other cases it means pushing at the edges of what it means to fit within one of our Gun Archetypes - such as an Automatic Sniper or a Burst Shotgun.

All four of these new weapons are available for purchase from SSgt Park’s Armory for Requisition Credits.

Over 20 items including Class Kit skins, Emotes, Decals and more!

Stay protected on the frontier of the Outer Rim with Weyland-Yutani’s APEsuit Mk.3, or go with the more casual look and slide into a pair of Seegson Maintenance overalls. This content and so much more is free for Deluxe Edition owners and is available as DLC for Standard Edition.

Upgrade to the Deluxe Edition